In this Masters preview, we discuss the predictive content of both course history and experience at Augusta National using data from every edition of The Masters since 1995. We then provide some specific predictions from our model, and highlight a few examples where our odds disagree with the market.

How important is experience?

Apart from the first two playings of The Masters, only Fuzzy Zoeller in 1979 has managed to win in his first appearance at Augusta National. At the time of this writing, there are 17 rookies in this year’s field; should we discount their chances of donning the Green Jacket come Sunday due to a lack of experience?

Shown below is a plot of the average strokes gained (i.e. strokes better than the field per round) for golfers with differing levels of experience at The Masters: 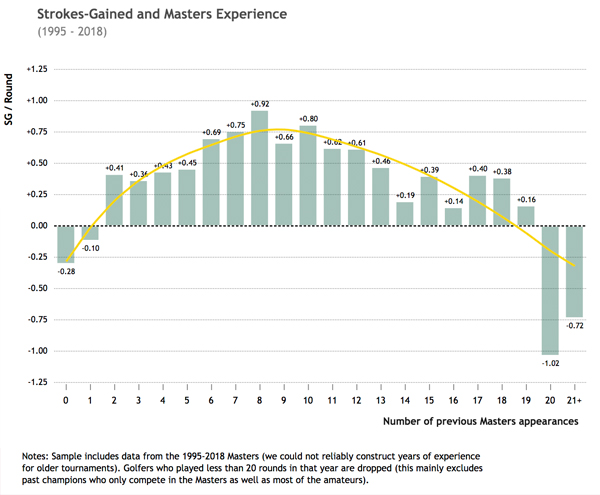 What’s going on here? There is an obvious confounder: namely, the “baseline ability” of each golfer. Those players with little experience at Augusta tend to be worse golfers (because they are younger, or just have never qualified before), while golfers with a huge amount of experience tend to be past champions who are past their primes. (The overall average strokes gained in the plot is above 0 because players with fewer than 20 rounds played in that season are excluded.)

For example, heading into the first round of the 2018 Masters, our model’s expectation for Jordan Spieth’s performance was 0.8 strokes gained over the field. (If this number seems small, remember that The Masters is a strong field.) Ultimately Spieth’s 66 was about 7.4 strokes better than the field’s average – meaning Spieth performed 6.6 strokes above his expectation in that round. 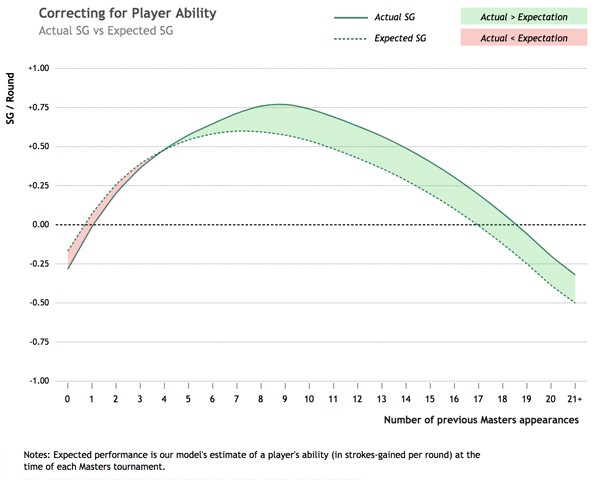 The plot indicates that rookies perform slightly (~ 0.1 strokes per round) below what their baseline predictions would indicate, while golfers with more than five years of experience tend to perform slightly above their expectations.

Put another way, if two golfers have identical baseline abilities, but one has 10 years of experience at Augusta while the other has none, than we would expect the former golfer to score 0.2-0.3 strokes better per round than the latter.

Note that the experience effects must sum to zero (one golfer’s gain is another golfer’s loss); this is the case in the above plot as there are more golfers in the low-experience bins.

Now, let’s briefly discuss course history. As in the experience analysis, to assess whether or not a player’s course history has predictive power we look at golfer performance relative to expectation. The question to ask is: does performing above expectation at a course in the past predict above-expectation performance in the future?

The Masters is unique in that it is played at the same course every year. Therefore, for some players, very long course histories can be constructed

However, there is no reason to group all course histories together. As the sample size increases, course history does become meaningfully predictive. For example, using histories of at least 30 rounds, we find that 20% of past course form is maintained in future rounds.

It’s important to note that as the sample size increases, the variance in course histories decreases quite dramatically (e.g. while it’s not rare to find a player performing 1 stroke above expectation for 4 rounds, it is rare to find one doing so for 30+ rounds).

The Masters is unique in that it is played at the same course every year. Therefore, for some players, very long course histories can be constructed.

The larger the course history sample, the more strongly we weight past performance at Augusta National: this ranges from just 2% for histories of four rounds or less, up to 30% for the longest histories.

The tables below display our model’s baseline predictions, as well as the adjustments for course history and experience that could be made to the baseline predictions, for a few different samples of players in this year’s field. Everything is in units of strokes gained relative to the PGA Tour average performance. 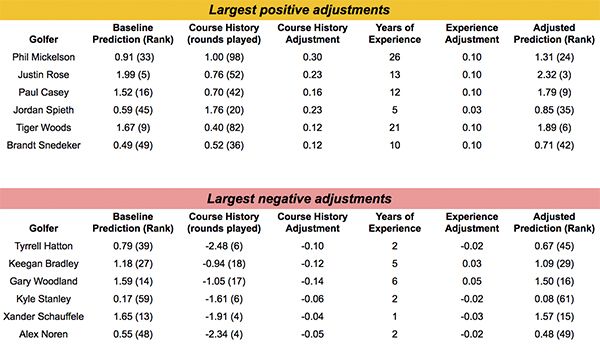 Second, Phil Mickelson’s record at The Masters is truly remarkable. In 98 rounds at Augusta National, Phil has averaged 1 stroke per round above expectation. This is noteworthy because of the large sample size. He is just the 33rd ranked player in this field in terms of baseline predictions, but is the 23rd ranked player after the adjustments are made.

Third, despite having the best course history at Augusta National at +1.76 strokes per round, Jordan Spieth does not receive the biggest adjustment due to his relatively small sample size. In other words, it is likely that a significant part of those 1.76 strokes is simply a product of randomness.

Finally, let’s finish with a discussion of our model’s odds as they compare to the market odds. A cursory look at odds from a few popular books makes it clear that the market is heavily weighting course history and, perhaps to a lesser degree, experience at Augusta National.

For example, Jordan Spieth is priced as around the 8th to 10th favorite by most books. According to our model, to reach the top 10 players in this field Spieth’s ability needs to be increased by nearly a full stroke per round on top of the positive adjustment we have already given him. Unless you believe Spieth will continue to outperform his expectation by well more than a stroke per round at Augusta National, the market is overvaluing him this week.

Conversely, Gary Woodland and Patrick Cantlay are examples of players our model likes relative to the market. Followers of our work know that this tends to be the case every week, but this week the gap seems especially pronounced as both Woodland and Cantlay have poor histories at Augusta National.

In the experience analysis, we found that rookies at The Masters do not underperform their expectation by much. It’s clear in the market odds that rookies are being penalized (even after accounting for the fact that the rookies have lower baseline abilities).

Two rookies that our model likes the most relative to the market are Aaron Wise and Keith Mitchell. In general, taking a positive stance on rookies seems like a good idea this week given how the market is pricing them.

To conclude, the overall takeaway should be to not get swept away by narratives surrounding The Masters. We have shown that the years of experience a player has at Augusta has little predictive power for their future performance. However, how a golfer has performed historically at Augusta National does warrant some attention if they have a long enough history.

As always, it will be exciting to see how everything plays out at this year’s edition of The Masters.

Data Golf’s Matt and Will Courchene are brothers who founded Data Golf, a website that uses data and statistical analysis to provide unique insights into the sport of golf. They write about how to use statistics to better understand performance in golf. Both brothers are lifelong golfers and fans of the sport.
See more articles by Data Golf