Golf’s major championship season continues this week at Pebble Beach Golf Links with the playing of the 119th United States Open Championship. In this preview, Data Golf provide predictions for the top players in the U.S. Open field according to their statistical model, and discuss a few of its disagreements with the betting markets.

To start, here are the model’s top 10 players sorted by predicted skill level (in units of strokes-gained per round relative to an average PGA Tour field). In addition to each golfer’s “baseline” skill and win probability, we have provided the corresponding values from a model that incorporates course history. 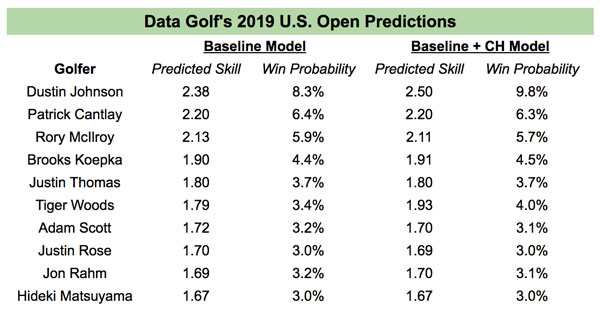 The “baseline plus course history” model, as its name suggests, includes an adjustment for each golfer’s historical performance at Pebble Beach. As we discussed in our Masters preview, to evaluate the quality of a golfer’s “course history”, it is their performance relative to their baseline at the time that matters.

For example, Tiger Woods has played 19 rounds at Pebble Beach, averaging a ridiculous +4.40 adjusted strokes-gained per round. After correcting for Tiger’s baseline skill at the time of each of those rounds, it turns out that he has performed 1.6 strokes above expectation at Pebble Beach. As a result, Woods has the largest course history adjustment of anyone in this week’s field.

Among this top tier of golfers, our model is by far the highest on Patrick Cantlay relative to the public market. It is interesting that the betting exchanges currently view Cantlay and Jordan Spieth as roughly equally likely to win; over the past 12 months, Cantlay has been performing more than 1 stroke per round better than Spieth.

Further, this scoring gap is entirely driven by differences in Cantlay and Spieth’s long games, which is the component of golf scores that offers the most predictive value. Shown below are Spieth and Cantlay’s 50-round SG off-the-tee moving averages since 2018 (Cantlay in green, Spieth in purple): 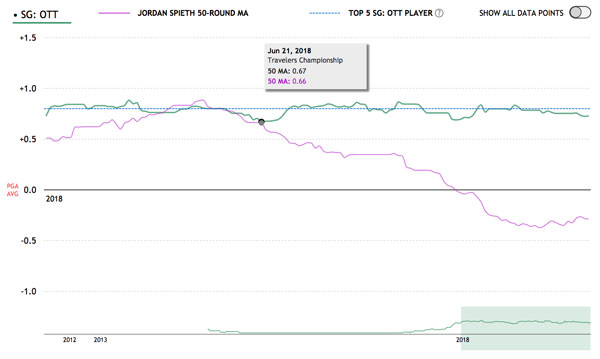 The model also likes Rory McIlroy slightly more than the betting markets appear to. McIlroy did miss the cut in his most recent start at the Memorial Tournament; however, not all missed cuts are equal.

For example, players who missed the cut by 1 stroke at the 2019 PLAYERS Championship actually had positive adjusted strokes-gained over their first 2 rounds. In McIlroy’s case, he lost 1 stroke in his two rounds at the Memorial; this is worth a slight downward adjustment to his predicted skill level, but nothing substantial.

In the remainder of this U.S. Open preview, we turn our focus to three specific players that our model views more favourably than the public appears to.

Despite not registering a win this season, Adam Scott is still one of the hottest players in the world right now. Over his last 20 rounds, Scott has averaged 2.4 strokes better than an average PGA Tour field, which is currently the 6th best mark in the world.

There may also be a dimension to Scott’s game that is “Koepka-esque”, in that he seems to perform above his baseline skill level at major championships. The graph below plots every round of Scott’s career, measured by strokes-gained total, with major championship rounds bolded. 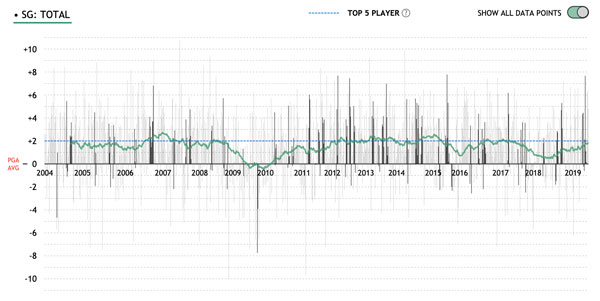 Evidently this last piece of information is likely more interesting than it is useful, as far as predicting Scott’s performance is concerned.

At the time of this writing, Jhonattan Vegas is ranked 81st in the Official World Golf Rankings and 67th in our Player Rankings. While our model is giving Vegas just a 0.6% chance of winning this year’s U.S. Open, the market is giving much less favourable win odds to the big Venezuelan (he is currently available at 760.00*).

The model currently projects Jhonattan Vegas to be about 0.5 strokes better than an average PGA Tour field. Looking at different odds offered to players that our model views as similar (Cameron Smith: 295*, Zach Johnson: 400*, Kiradech Aphibarnrat: 400*, Alex Noren: 230*), it is clear that the market is relatively low on Vegas.

As mentioned previously, our model favours golfers who are strong performers off the tee, as it is the most informative aspect of a player’s game when trying to predict future performance.

Through 47 ShotLink measured rounds this season, Vegas has been an elite off-the-tee player, gaining an average of 0.85 strokes per round.

A “Top 5” OTT player will typically gain about 0.8 strokes per round over the course of a PGA Tour season, which puts into perspective just how impressive Vegas has been.

To understand this recent form in the context of his career, the table below breaks down Vegas’ strokes-gained by season:

If the early prices in the outright winner markets are any indication, Jhonattan Vegas should provide excellent value in the Top 10 or Top 20 markets.

Jim Furyk has been a model of consistency for most of his lengthy career on the PGA Tour, hovering right around the performance level of a Top 5 player for almost two decades.

After a decline in performance in the 2017 and 2018 seasons, Furyk has been experiencing a resurgence of sorts in 2019, having averaged +1.4 adjusted strokes-gained over his last 50 rounds. Further increasing his appeal this week (to us) is the fact that Furyk has poor course history at Pebble Beach, averaging 0.4 strokes below baseline in his 45 rounds at Pebble Beach. This could be something the markets weight more than our model indicates you should.

Combining his poor course history with the fact that Furyk has been playing consistently solid without notching many high finishes (his solo 2nd at The PLAYERS being the notable exception), is a recipe for an undervaluation of his current skill level by public markets. Furyk can be backed on at European odds of 247*, while our model estimates his fair odds to be 151.

That wraps up our preview for the 2019 United States Open. Pebble Beach has been the site of several historic moments in golf: from Nicklaus’ 1 iron at the 17th in 1972, to Tiger’s unparalleled dominance in 2000. Hopefully this year’s Open provides the stage for yet another memorable moment at one of golf’s most storied venues.

Data Golf: Matt and Will Courchene are brothers who founded Data Golf, a website that uses data and statistical analysis to provide unique insights into the sport of golf. They write about how to use statistics to better understand performance in golf. Both brothers are lifelong golfers and fans of the sport.
See more articles by Data Golf