There are several reasons why people believe the three points gained from one win in soccer may be more important than another win. One classic example of this would be when teams who are close together in a league table play, it is often labelled as a “six-pointer” (this is because one team wins three points and the other loses a potential three points).

Of course, no win is ever actually worth more than another regardless of how often a cliché is used. However, by analysing how teams perform in the first six games of the season we can see if it has any effect on their overall position in the league and if those first six games are the most important in the season.

What do we learn in six games?

Six games is a very small sample size to look at from an entire season but it obviously tells us a lot more than one game. Using the Premier League as an example, the fixture list is compiled at random but after the first six games each team will usually have played three home games and three away games.

Ahead of the new season, there is a lot for bettors to take into consideration. New players, new managers and even a new stadium will have an impact on how a team performs and after six games, we can begin to see if that impact is a positive or negative one. The first six games also give bettors the chance to assess how newly promoted teams will perform.

Using data to inform your betting

Below is data from the last three Premier League seasons which shows the league table after six games compared to the final league table (after 38 games). There is no clear pattern to how league positions change but it is interesting to see just how much things can change. 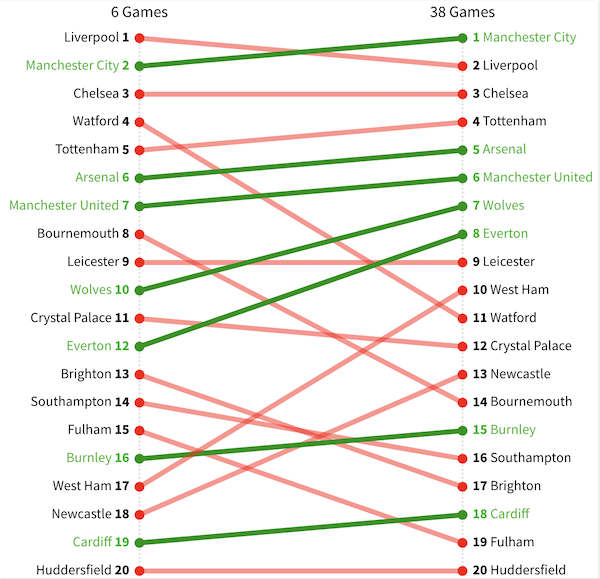 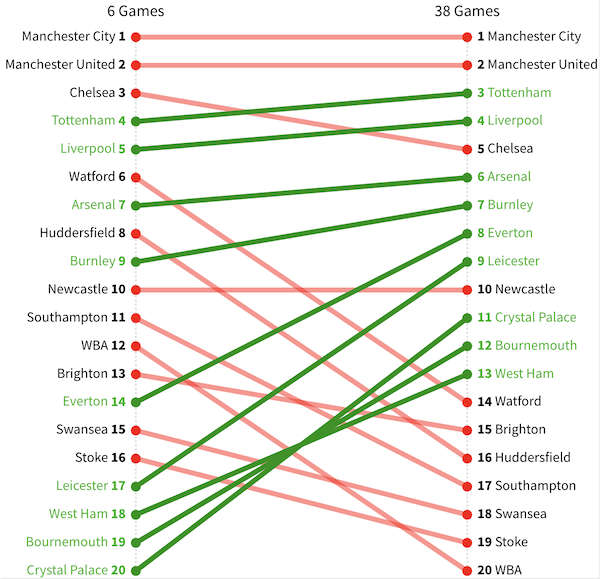 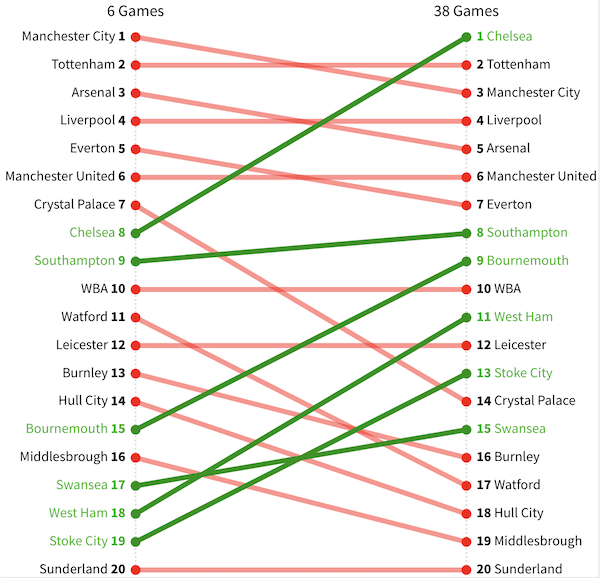 When teams perform well in the first six games

You would expect those who perform well within the first six games of the season and find themselves near the top of the table to be regular contenders in outright Premier League betting and remain in a similar league position over the next 32 games.

There are, however, examples of teams outperforming expectation within the six games and then regressing to the mean (and worse) throughout the remainder of the season (or vice versa). Aston Villa’s drop from 6th to 17th in 2014/15 and Crystal Palace’s jump from 20th to 11th in 2017/18 stand out as two examples of this.

When teams perform poorly in the first six games

Similarly to teams who have acquired a lot of points in the first six games doing well, those who find themselves at the bottom of the table without many points after six games tend to struggle for the remainder of the season.

There are exceptions to the aforementioned rule – Southampton’s rise from 16th after six games to 6th after 38 in 2015/16 for example. However, the fact that at least one team in the bottom three after six games has been relegated in 22 of the 24 38-game Premier League seasons shows how hard it is to recover from a poor start.

While one team in the bottom three after six games is usually relegated from the Premier League at the end of the season, two of those three are also relegated on quite a regular basis – this has happened on 11 occasions in the last 24 seasons. All three teams who are bottom after six games have been relegated once (in 2006/07).

How can bettors use this data to their advantage?

Bettors can benefit from using the data above in different ways when betting on the Premier League. As outright markets are often reposted throughout the Premier League season, bettors can assess whether a team still offers value after a good or bad start when analysing their chances of winning the league (or getting relegated/avoiding relegation).

Alternatively, the first six games of the season can be used to gauge performance and help predict the outcome of individual matches. As well as using the results from the early part of the season, applying Poisson distribution and using an expected goals model will also help bettors implement a more strategic approach to betting.

Benjamin Cronin studied English with Creative Writing (BA) before pursuing a career that combined his love of sport and fascination with betting. An avid fan of numerous sports, his writing now covers anything from in-depth major sporting event previews, to examining betting trends and techniques.
SEE MORE ARTICLES BY BENJAMIN CRONIN