Serious bettors will often claim that multiples are a waste of time. In essence, these types of bet reduce the probability of winning while increasing the potential profit. Can multiples actually offer betting value? Read on to find out.

It’s a story that you’ve probably read about time and time again – the minimal risk, maximum reward headline grabber that bookmakers will often post on social media in an effort to make their customer’s think that one day it might be them.

The big money win is the dream when you talk about multiples (also known as accumulators or parlays). Place a small amount of money for the chance to win big. What could be better?

In truth, multiples are rarely seen as an attractive option to the professional bettor and many believe it is just something purely for recreational players who want to sweat through a couple of events and get more and more excited with every single winning game on their bet slip.

In this article I want to look into the different kinds of multiples, the reason they are placed and the risks/rewards for doing so.

When talking about safe multiples I am referring to connecting any single bet you want to place with another single bet that has a very high chance of success, such as Roger Federer winning the first round of any given tournament.

You are often going to pay a bit extra, but it allows you to bet much more money on a certain outcome by combining it with other games.

This approach is often used to increase the payout of the actual bet you want to place and therefore allows for a higher return on investment. The risk with this is that people underestimate how likely “likely events” really are.

If you place a bet on someone who is 90% likely to win an event, there is still a chance of 10% that it does not happen. This doesn’t sound like much, but if the initial bet you wanted to place had a 50% chance of winning, suddenly your multiple only has a 45% chance of paying out (this is explained in more detail later in the article).

Playing all the favourites

Another classic case of placing multiples is to bet on all favourites on a given day. Let’s say we want to bet the favourite in every La Liga game for one day, and for the sake of argument, every one of them has a 90% chance of winning. So how high is your chance of winning that multi-bet? It’s small.

Even if every single team is a huge favourite, the chance of all of them winning is much smaller, ±35%.

With a multiple bet you only win if all of your selections win. All of the 10 teams to win with a 90% chance each (decimal odds of 1.11) can be calculated as follows:

Odds for this hypothetical 10 fold multiple bet would be 2.8394 which is the same as a 32.5% chance. If we do the same exercise for only 80% favourites, the odds look much worse, ending up around 10.74% chance of winning.

Even though each of the favourites is unlikely to lose their match, the chances of any one of them to lose are not that small anymore.

A previously mentioned the normal perception of a multiple bet is one that involved betting a tiny amount with the chance to receive a gigantic return.

With this type of bet, you basically play only underdogs and hope that all stars align. Or a lot of 50/50 wagers and you hope you hope that somehow they all manage to win. While both of those events are unlikely, the potential payoff is massive.

None of these strategies are going to be used by professional bettors with the aim of making a profit (maybe just for a bit of fun) as placing multiples often requires one to play slightly worse odds when offered by the bookmaker. The volatility of those events are also very high.

Bettors who place multiples also might be limited by having a short bankroll and this will rarely apply to professional bettors. Instead, they will play single lines for higher stakes on all events that they would have multiple bet on otherwise.

There are still professional multi-bettors, and for the remainder of this article, I will purely focus on them.

While it may appear wrong from an expected value point of view to place any multiple bets, there are still bettors who continually do only that and win a considerable amount most of the time. They even perform better than if they had placed the bet individually on better single lines.

The trick is to understand the upsides and downsides of placing a multi-bet.

While the first five points mentioned above should be self-explanatory, the last two deserve some inspection.

I will use some calculations presented in my previous article to demonstrate how multiple betting can result in a higher ROI than placing the bets individually.

Let’s take the following example. You have €200 to play with and want to place them on two games. You think you have a 50% of winning each individual bet.

The bookmaker currently has them both priced at 2.10 for regular betting, and 2.09 for multiple betting. So your options are:

In the first case you will end up with: 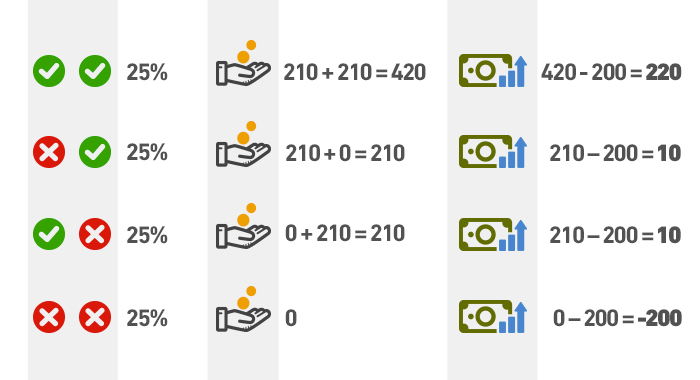 Expected profit for Option A

If we do the same math with the multiple we end up here: 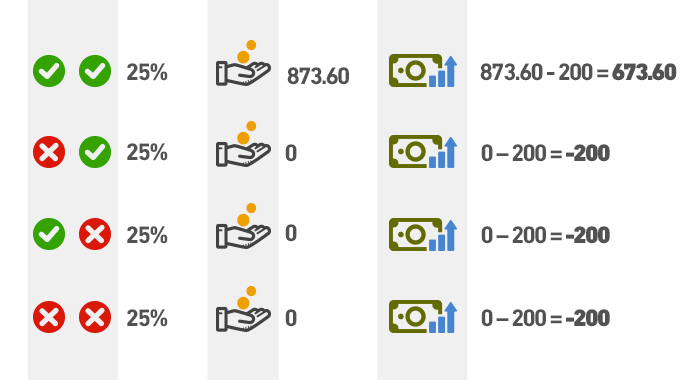 Expected profit for Option B

This shows that if you have an edge in each of the wagers you place, you can easily upset the additional charges the bookmakers are applying to place a multiple.

Getting down a lot of money at the current prices

Round-robin is a type of multiple bet that allows one to place bets on all combinations of the outcomes you have chosen. As an example, if you want to place a bet on four contestants in a round-robin, you can place:

Again, you are often going to pay a bit extra, but it allows you to bet much more money on a certain outcome by combining it with other games.

If you really want to place a bet on a specific team and the limit right now is €100, then placing a four-way round-robin may allow you to place an amount on your team that exceeds that limit. If you place a total of seven bets at the same time:

Even if each wager in the round-robin has a limit of €50, these seven bets enable you to place a total of €350 on your team, where on the single line only €100 would have been possible. This also scales with the edge example from above, but the math is getting a bit more complicated, so I leave it to the readers to look into this themselves. 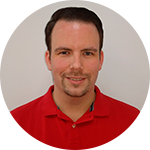 Sascha Thomsen is the Head of Analytics at Pinnacle. Coming from a maths and BI background, he is trying to see things within the sports betting industry from a more logical point of view. Sascha and his team are always trying to make sure Pinnacle stays competitive, informed, and effective.
In his articles, he will provide a sneak peek into the world of Analytics by showing how to solve problems within the sports betting industry, or just different approaches to problems you might not have thought about yet.
See more articles by Sascha Thomsen